Taking its cue from the 35% campaign’s corporate complaint, Southwark News has revealed the reality behind the great affordable housing illusion.

It’s latest edition devoted a whole page to ‘broken social housing promises’, citing cases of social rented homes being delivered as affordable rent and affordable homes ending up on the open market. Southwark Council has responded to the complaint saying ‘it takes it very seriously’ and confirms that it is taking legal action.

However, this leaves many questions unanswered - how many breaches have occured? which developers or housing associations are breaking their promises? how many social rented homes have been lost? how is Southwark going to get them back? how will it prevent this from happening in the future? how widespread is this practice? - so this is a complaint that we will be pursuing.

This is a list of all the breaches we have identified and submitted as evidence:

Here is a list of where we say that additional breaches have occurred:

Southwark Council needs to give a full response and explanation for each of these alleged breaches. Unless it does so we can have no confidence that it is indeed taking the breaches seriously. We find it hard to believe that the Council did not have some idea of what was going on, given its extensive relationships with developers and housing associations.

The involvement of housing associations in these alleged breaches is a particular concern. All private developments which deliver affordable housing need housing association partners and most people would assume that these are doing their upmost to guarantee the maximum affordable housing of the right kind - i.e. the tenure approved at the planning committee hearing. It appears that this is not the case.

It goes without saying that these breaches are making a real difference to people who rely upon social rented housing, as the main example given in the Southwark News shows. This is in fact the Colorama development - a former photo film processing centre on Lancaster street, which was demolished in 2014 following planning permission granted for its replacement by the Chroma buildings, a residential development comprising 39 flats.

At the time, Southwark’s planning committee justified the demolition of the period buildings by claiming that “the redevelopment would bring much-needed affordable housing”, with the planning report for the application promising the provision of 19 social rented habitable rooms.

However, two years later when the Greater London Authority published its affordable housing outturn data, it showed that these were being provided as affordable rent not social rent. These range up to 59% market rent with prospective rent levels of £215pw for a 1-bed flat - more than twice the current average social rent currently charged in Southwark.

The scheme has now completed and new residents have begun moving in. Needless to say, these won’t include any of those on the Council’s waiting list who can’t afford anything except social rented housing.

It seems clear that together Southwark, private developers and housing associations are not delivering even the meagre amount of social rented housing that they claim. Southwark’s response confirms this, but is otherwise feeble. Southwark must give a full and detailed account of each alleged breach, say what action it is taking to get the social rented housing promised and what it is doing to prevent these practices from continuing. Southwark News also revealed that the Council is now considering selling the Walworth Town Hall, gutted by fire 3 years ago. This is after solemn promises were given that it would be restored back into public use. The Town Hall sits right on the edge of the Heygate estate, which as ‘Elephant Park’ will become home to such worthwhile developments as the ‘skyscape’ collection, currently being marketed at skyscraping prices - prices so high that Lend Lease is too embarrassed to publish them.

As anybody who has seen it since its renovation will know, the Town Hall’s architectural merit far outstrips anything the Elephant regeneration has so far had to offer, so it could be an eminently desirable purchase.

The building’s architecture is a concrete record of proud civic administrations and a leagacy of the days of municipal borough councils, when Southwark once had three town halls, in Peckham and Bermondsey as well as Walworth. It is a sad irony that Walworth Town Hall now looks destined to join its sisters as luxury private developments. 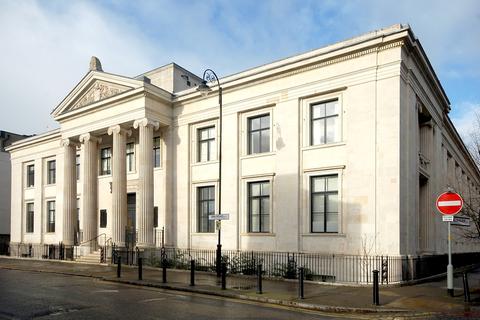 Bermondsey Town Hall was sold off in December 2012 to developers Hollybrook Ltd, for the knock-down price of £4 million.

By 2014, Hollybrook had carved out 41 luxury apartments from the building, each selling for over a million pounds; a promo video gives prospective buyers a guided tour:

Peckham Town Hall used to serve as Southwark’s main Town Hall for its core administrative functions. The Council sold it with planning permission to a Jersey-based developer (Alumno Developments) for just £5m in December 2014.

Besides allowing conversion to residential accommodation, the planning permission also gave consent to demolish the theatre behind the Town Hall and replace it with a new theatre - with a 7-storey extension above. The town hall will now comprise 149 student flats as well as some ‘affordable’ studio space for artists and a cafe run by the Council’s long-term cultural regeneration partner Hotel Elephant.

Paragraph 62 of the planning report explains that the developer has submitted a viability assessment, which claimed that it cannot provide any affordable housing because of the high cost of providing the new theatre and art studios. It justified its position, saying that “these facilities comprise substantial planning contributions that would bring a comprehensive range of activities and services of significant benefit to local residents, community groups and individuals”. The officer’s report for the application concludes as follows:

Officer’s report for the planning application

The report goes on to say that the section 106 planning agreement would ensure that rent levels of the student accommodation would be “no greater than rents of comparable student housing”; and that the artist’s studios would be “significantly below market rent for comparable spaces”.

Officer’s report for the planning application

However, the actual section 106 planning agreement sealing the permission, provides no mechanism for defining ‘comparable student housing’ and says that affordable workspace rents should be “no LESS than 45% below market rent for comparable properties” - a significant typo which nobody in Southwark Council seems to have noticed. In any event it now means that the developer is obliged to set rents very much to its own advantage (above 45% of market rent - not below).

Another good deal for developers, not so good for Southwark.