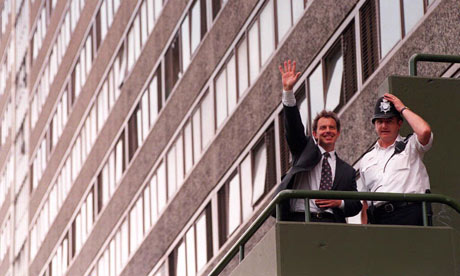 The Aylesbury estate regeneration was initiated by Tony Blair as part of New Labour’s ‘Urban Task Force’ inner-city renewal programme. He chose the Aylesbury as the location for his inaugural ‘forgotten people’ speech, directly after being voted in as prime minister in 1997.

The Aylesbury was subsequently awarded £56m funding under the ‘New Deal for Communities’ partnership as part of Blair’s urban renewal programme.

In 2001, residents on the estate were balloted on the prospect of stock transfer and redevelopment by a Housing Association. There was a high turnout (73%) and over 70% of residents voted against the proposals. This council Executive report postulates that one of the reasons behind the ‘NO’ vote was that residents were concerned that they would have to pay higher rents and service charges on the redeveloped estate.

In 2002, the council’s Head of Housing Regeneration said it was planning to press ahead with the redevelopment regardless, claiming that bringing the existing estate up to scratch would cost £200 million, a sum that the council simply didn’t have.

Residents’ concerns about Housing Associations charging higher rents turned out to be well founded, when it emerged that Notting Hill Housing (the council’s development partner) had secured funding for the scheme, which was linked to the provision of affordable rent rather than social rent (nevertheless capped at 50% rather than 80% market rent). However, even capped at 50% market rent Southwark’s own housing data shows that the minimum income required to afford this, is twice what Southwark council tenants earn on average.

The council insists that all new rented homes will be social rented not affordable rent, but revelations that Notting Hill had delivered affordable rent instead of the social rent agreed at its Bermondsey Spa regeneration, have further thrown these promises into doubt.

Extract from the Development Partnership Agreement

In any case Notting Hill’s planning application for the redevelopment admits that there will be an overall loss of 934 social rented units through the redevelopment (assuming that the replacements will be social, not affordable rent: 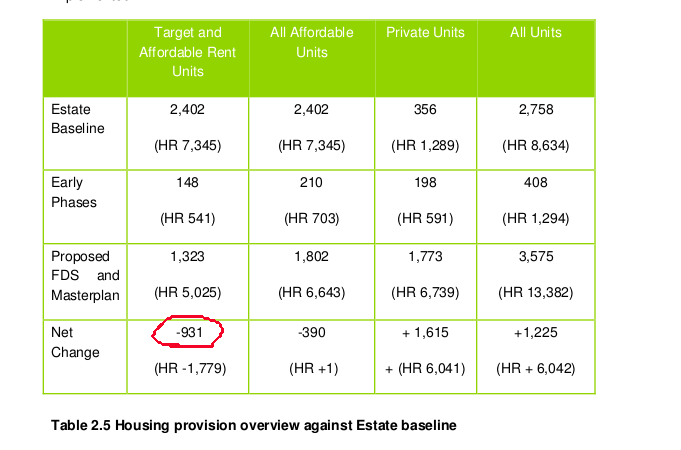 Note that the replacement social housing is referred to both as social rent and affordable rent throughout the planning application documents.

The most recent phase of the scheme (site 7 - Wolverton/‘Harvard Gardens’) is being developed by L&Q and comprises 147 new homes, of which 48 will supposedly be for ‘social rent’. However, the section 106 planning agreement for the site says ‘affordable rent’ and a question put to the Mayor confirms that these will be let at affordable rent of up to 50% market rent.

At the 2015 CPO Public Inquiry, Professor Jane Rendell from the Bartlett School of Architecture questioned the council’s cost/benefit appraisal for its decision to redevelop rather than refurbish. She took the Inquiry through all of the figures and showed that cost estimates for refurbishment had been inflated by nearly £150m. (See AJ article).

It was also confirmed during the course of the Public Inquiry, that the council has spent a staggering £46.8m on the Aylesbury regeneration scheme to date. This has comprised total capital account costs of £32.1m (demolition & acquisiton) and revenue account costs amounting to £14.7m (Management & Administration).

The council has therefore spent £46.8m demolishing and redeveloping 112 homes2 on the scheme to date (£417k per home), compared to the £20,261 per home it is spending bringing homes up to Decent Homes Standard elsewhere on the estate.

When the Council Executive took its decision to redevelop the estate in September 2005, it did so on the basis of a costings estimate which calculated that the scheme would incur an overall cost to the Council of £16.1m over the scheme’s 10-year development period. However, the Council’s budget books show that it is spending nearly £14m on the Aylesbury scheme during the 2015/16 year alone.

Other London boroughs take a different approach to regeneration. Islington has an estate called the Six Acres estate near Finsbury Park. The Six Acres estate was built at the same time as Heygate & Aylesury, by the same contractors (Laing) using the same system (Jespersen 12M).

Instead of demolshing its estate and handing it over to the private sector at a loss, Islington Council chose to refurbish the Six Acres estate in 2012. The 473 homes on the estate were refurbished with new external wall insulation, new entry doors, exterior furnishing improvements, green roofs and cycle shelters.

The entire Six Acres estate refurbishment and public realm improvement works cost a total of just £5.15m. This works out at around £10k per dwelling; far less than the circa £60k per dwelling that Southwark Council is spending on emptying and demolshing the Aylesbury estate (£150m/2500 homes).

Extensive research by the University College London and case studies by leading architects has shown that refurbishment is better not just financially, but also socially and environmentally.

Photos of Six Acres before regeneration

Photos of Six Acres after regeneration

Clearly the business case for refurbishment is much stronger than that for demolition. However, Southwark says it’s not about the fabric of the estate but its design. In her Public Inquiry evidence, Southwark’s in-house architect confirmed that “the condition of the buildings does not, itself present a case for demolition and redevelopment” but that the “fundamental issue is the estate layout and the poor urban environment this presents”. In paragraph 5.3 of her evidence she gives examples of this ‘poor urban environment’ which include criticisms that:

So translating the architect speak to plain English we can say that Southwark is spending twice as much demolishing the Aylesbury estate than it would cost to refurbish it, on the grounds that the green spaces are “under used” and the lack of a traditional street layout “deprives” residents of a “clear identity”.

More criticisms of the estate and grounds for its demolition can be found in other officers’ proofs of evidence submitted to the Public Inquiry:

The 35% Campaign has also obtained a redacted copy of Notting Hill’s viability assesment for the Aylesbury redevelopment via an FOI/EIR request. Despite being a registered charity, Notting Hill has claimed commercial confidentiality as the grounds for its redactions. Interestingly we see that despite the development being publicly funded and built on public land, Notting Hill claims that “increasing the number of affordable homes would result in the scheme falling below the prudent profit level for Notting Hill”.

The Aylesbury estate masterplan outline planning application gave consent for a total of 1,378 parking spaces in the new development, equating to four out of ten new households with parking.3

The officer’s report for the Aylesbury masterplan application also confirms that there will be a net loss of 1.8 hectares of open space as a result of the redevelopment: 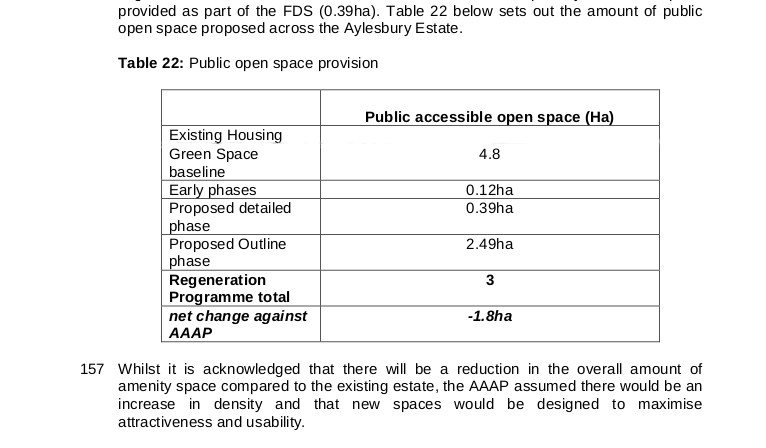 Further, the new open spaces in the development will not be public open spaces adopted by the council; they will be privately owned and managed by a subsidiary of Notting Hill Housing Group.